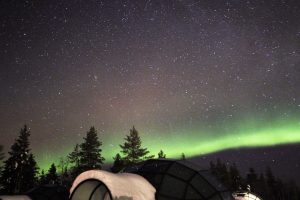 The solar wind is a stream of charged particles which are ejected from the upper atmosphere of the sun. It consists mostly of high-energy electrons and protons that are able to escape the sun’s gravity in part because of the high temperature of the corona and the high kinetic energy particles gain through a process that is not well understood at this time.

The aurora is now known to be caused by electrons of typical energy of 1-15 keV, i.e. the energy obtained by the electrons passing through a voltage difference of 1,000-15,000 volts. The light is produced when they collide with atoms of the upper atmosphere, typically at altitudes of 80-150 km. It tends to be dominated by emissions of atomic oxygen–the greenish line at 557.7 nm and (especially with electrons of lower energy and higher altitude) the dark-red line at 630.0 nm.

The two most commonly referenced data points in some graphs are the Solar Wind (yellow line) and Bz component (red line). During times of relaxed solar activity, the solar wind usually streams past Earth at a speed of 250 km/s to 400 km/s. When a solar flare takes place, it can sometimes eject material into space and towards Earth also known as a Coronal Mass Ejection. The solar wind speeds carried past Earth by these shockwaves can sometimes exceed 700-800 km/s or even higher. The greater the increase, the stronger an impact to Earths geomagnetic field can be.

The Bz component represented by the red line is the current condition of the Sun’s magnetic field, also known as the interplanetary magnetic field (IMF).